Assistance is available via email or phone. The PDC office is open for business by appointment only, consistent with the governor's emergency proclamations. Please contact us for an appointment or assistance at (360) 753-1111 or pdc@pdc.wa.gov

The Public Disclosure Commission is offering support for the goals of a Seattle proposal that would limit contributions to independent-expenditure political committees and bar donations from foreign-included companies. 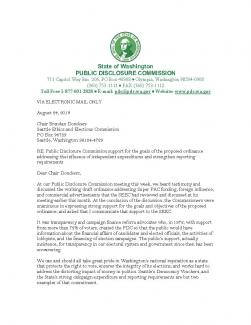 In a letter to the Seattle Ethics and Elections Commission (SEEC), PDC Chair Anne Levinson said such legislation would be "another important tool to address the influence of money in campaigns, and to guard against the potentially deleterious effects of excessive corporate spending in municipal elections."

Levinson offered the PDC's assistance as the SEEC continues to analyze the proposal, which Seattle City Councilmember M. Lorena GonzÃ¡lez has said she plans to introduce.

The proposal, in addition to creating new rules for some political contributions, would allow the public to request information from commercial advertisers about a broader category of ads, including those that seek to influence City Council decisions.

To read Levinson's entire letter, click on the image.